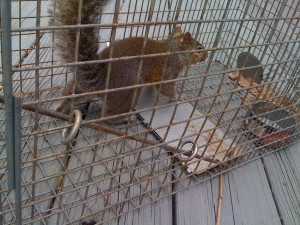 A common mistake that people make while attempting squirrel removal from attic is to seal up the hole during the day while the squirrel is out playing in the trees. The results can vary from this tactic. First of all, depending on the time of the year, there could be a litter of squirrels in the attic that aren’t old enough to leave the attic on their own volition. If the mother squirrel comes back to nurse the young squirrel babies to only find her entry blocked, she will do whatever it takes to chew back into the attic. Even if re-entry includes sawing through the new fascia board you spent all Saturday painting and replacing. If you are fortunate enough to successfully remove the mother squirrel from the attic, now you have 2-4 baby squirrels that are trapped in the attic with no food or water source. Within a few days the squirrels in the attic are going to die and leave a dead animal smell in the attic. Worst case scenario would be one squirrel getting trapped in a wall and causing the house to smell.

Secondly, squirrels don’t always stay out all throughout the day. Many times they will come and go especially if it is an adult female squirrel that is tending to her baby squirrels in the attic. You might get lucky and catch the squirrel while they are out but if no squirrel trapping method is used, it will return to your home with one mission and that is to get back into the attic. After a squirrel has imprinted on your attic with the oil from its fur, urine and its fecal matter; the squirrel on the roof will pick up on its scent. Many times it is a learned behavior because the squirrel was born in the attic and living in the attic during the cold seasons is what it knows.