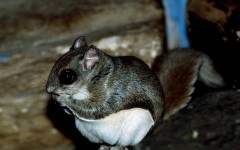 Recently we had a homeowner that called our office and stated he just moved into a brand new house in Charlotte North Carolina. Within days of moving in all his belongings in, it became apparent a flying squirrel or flying squirrels were living above his trey ceiling. Around two in the morning it began to sound like a soccer match was being played above their bed. Knowing these details it was clearly a flying squirrel living in the attic. This eliminated the grey squirrel because they are diurnal and would usually be asleep at night time.

When I pulled into the neighborhood, I immediately noticed that several houses were unfinished or were just sitting vacant. This area had clearly suffered from the Great Recession. After driving street after street of unfinished homes I arrived at my client’s house. He greeted me in his driveway and began to discuss more in detail his flying squirrel problem. He said that he, his wife and two boys had just relocated from Mooresville NC. The corporation he was working for had just opened a branch in Charlotte. The homeowner was baffled by the flying squirrels in the attic because nobody had ever lived in the house. My next question to him was when the house was built. He said 2009 curiously wondering why that would have anything to do with his flying squirrel dilemma. His home had sat vacant for almost three years.

As we finished our conversation in the driveway, I took a quick glance at all the different rooflines and my suspicions were that the flying squirrels were getting in some sort of contruction gap. As we made our way upstairs and pulled down the attic ladder. The freshly blown insulation at first glance appeared to be untouched. I shined my Dewalt 18 volt flashlight across the white snow like fiberglass insulation and started to see something peculiar. There were small holes about the size of a half dollar that the flying squirrels had burrowed into the insulation.

I made my way towards the attic space above the master bedroom. The flying squirrel activity in the attic was becoming more substantial. You could now see paths that the flying squirrel was running back and forth. I began to examine the trails a little bit more in detail. There did not appear to be an droppings in the paths. The big determining factor in identifying whether it is a flying squirrel problem is their droppings. Flying squirrels will use the restroom in a latrine or in simple terms an area where critters go to use the restroom. After the inspection was complete is was time to move on to the trapping phase. Luckily we were able to get all the flying squirrels out within a week and seal up all the entry points along the roofline.